Home » Travel » One Year Later: A Look-back at Ferrandi and my Time in Paris 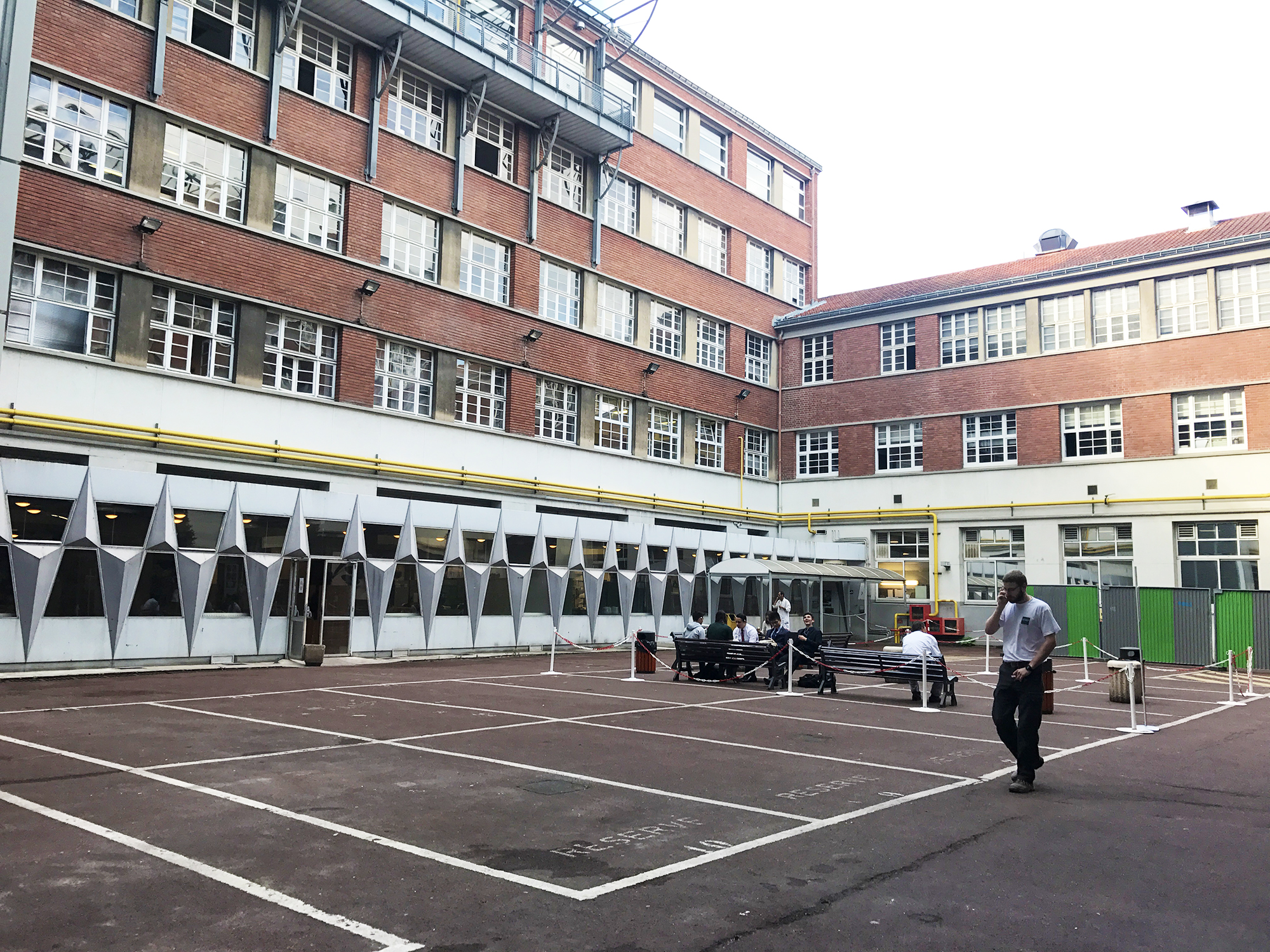 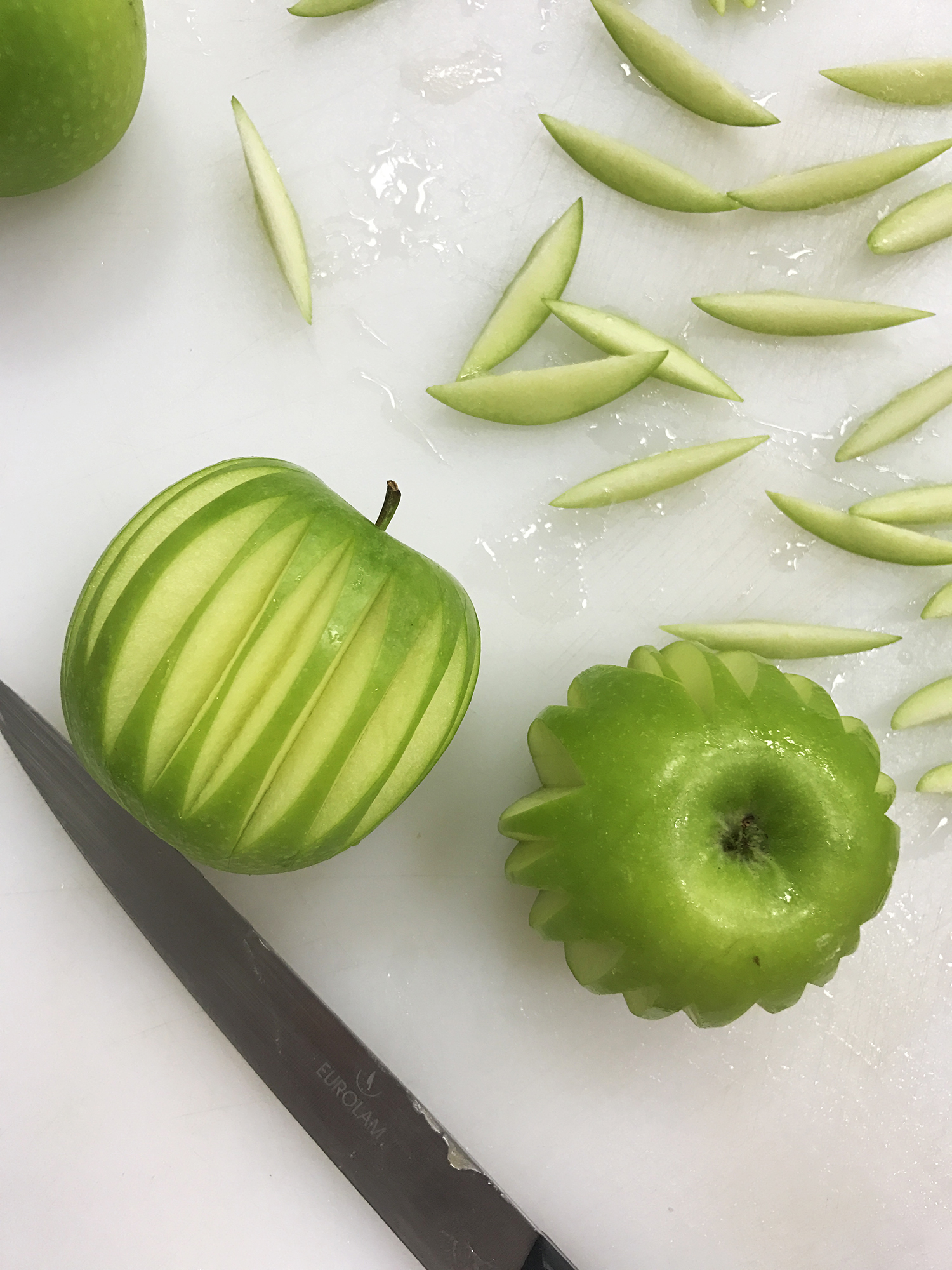 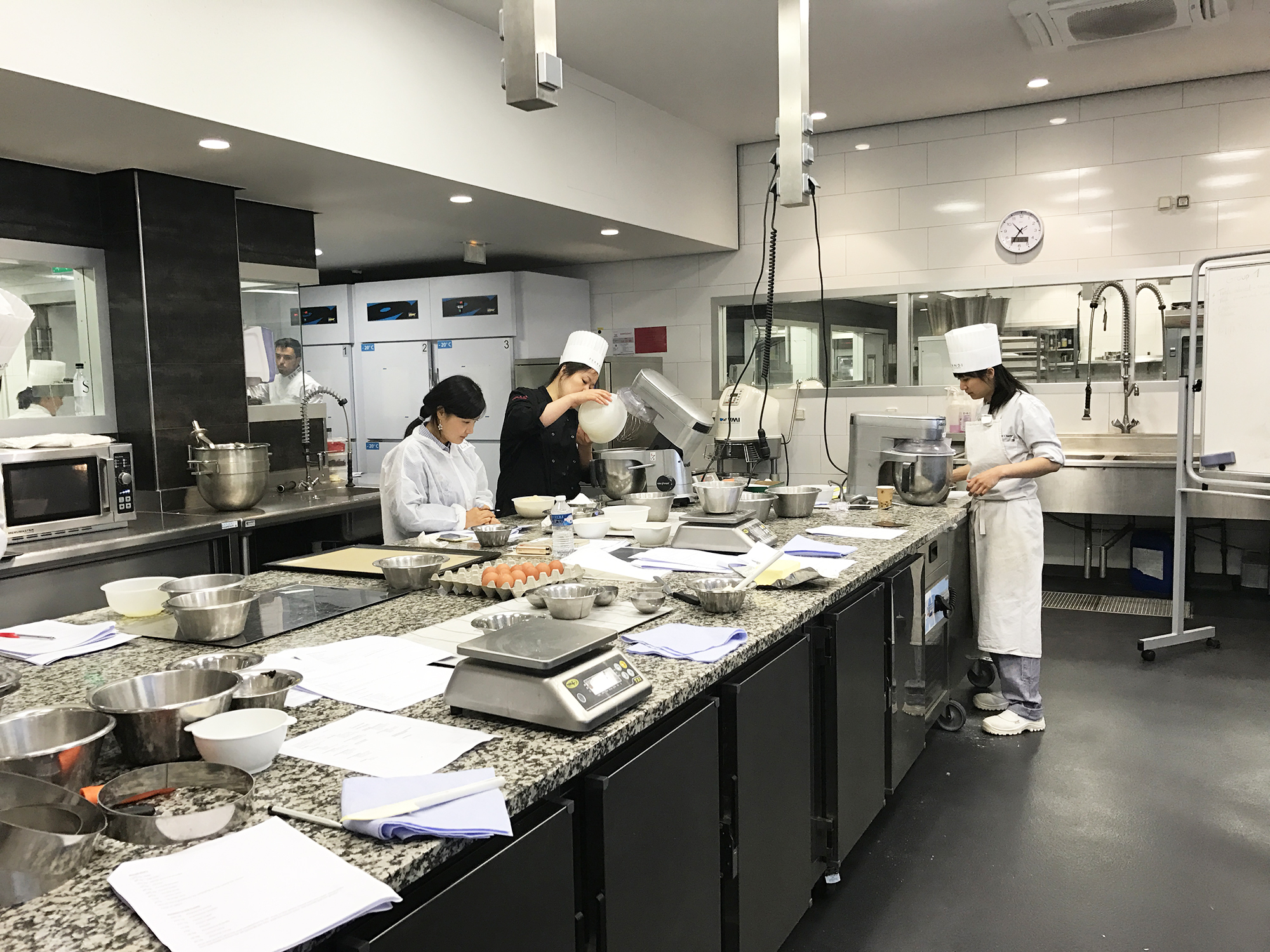 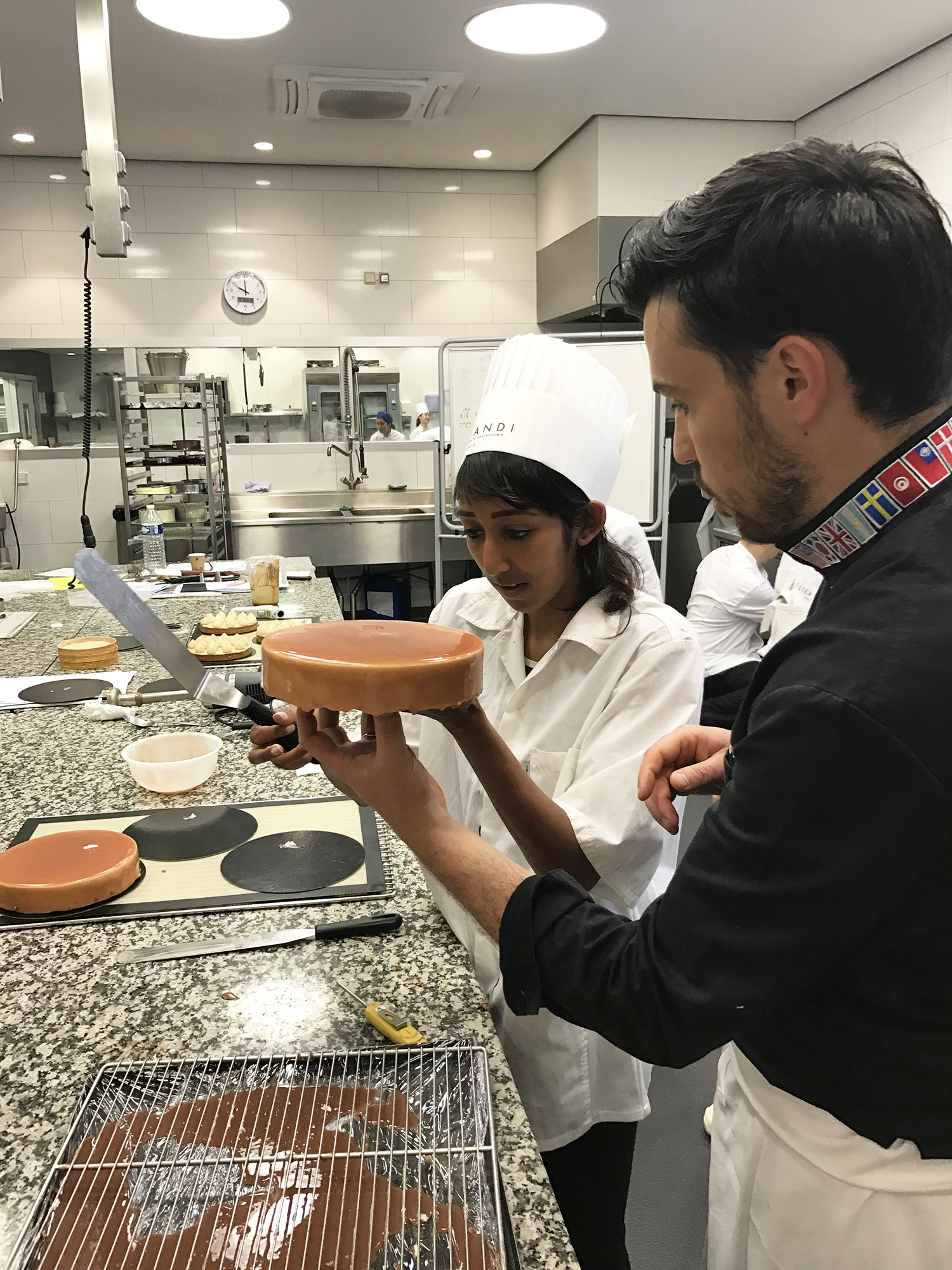 As most of you know, last year I went to Paris to get an advanced pastry certification. I’d worked professionally in kitchens for years, eventually leaving them for tech but missing the life sorely. In the same month that I got accepted to Ferrandi School of Culinary Arts, I also lost my job and all my savings due to family issues.

After a lot of crying and binge watching Anthony Bourdain, I started a GoFundMe and reached out to the amazing network I’d formed around the world through traveling and blogging, and I went to Paris! This is a story of my time at Ferrandi, something I felt too overwhelmed to write about until now. And it’s a story of where I am now, a year later.

Going to culinary school as an experienced professional is like going to bootcamp. You arrive as you would in a kitchen job—at least 20 minutes early to change into your chef jacket, apron, and shoes, with a few extra minutes to grab coffee and finish it before class starts (can’t risk spills). At Ferrandi, they gave us 2 tokens a day to get coffee from the espresso machine. But these were French portions of coffee and nowhere near enough what we’d need throughout the day. By day 3, I’d convinced the admissions advisor to double our tokens.

You’re also expected to bring your own equipment. When you’ve spent enough time in kitchens, you learn to have favorites. And then you bring your favorites to whatever kitchen you find next. In a world that’s so hectic, it’s a piece of consistency that marks who you are no matter where you go. And for those who ask, my favorite knives are Global, and my favorite offset spatulas are from E. Dehilleron.

There’s also no hand-holding at Ferrandi, so you better know your shit. On our first day, our instructor introduced himself—Bastien Girard, the winner of the World Championship of Pastry 2017, and a MOF (Meilleur Ouvrier de France, a very prestigious title awarded to craftsmen in France. Think of it like being knighted in the pastry field. You get a special chef jacket with the collar adorned in French flag colors, so everyone knows how much of a badass you are). To say I was freaking out was an understatement. 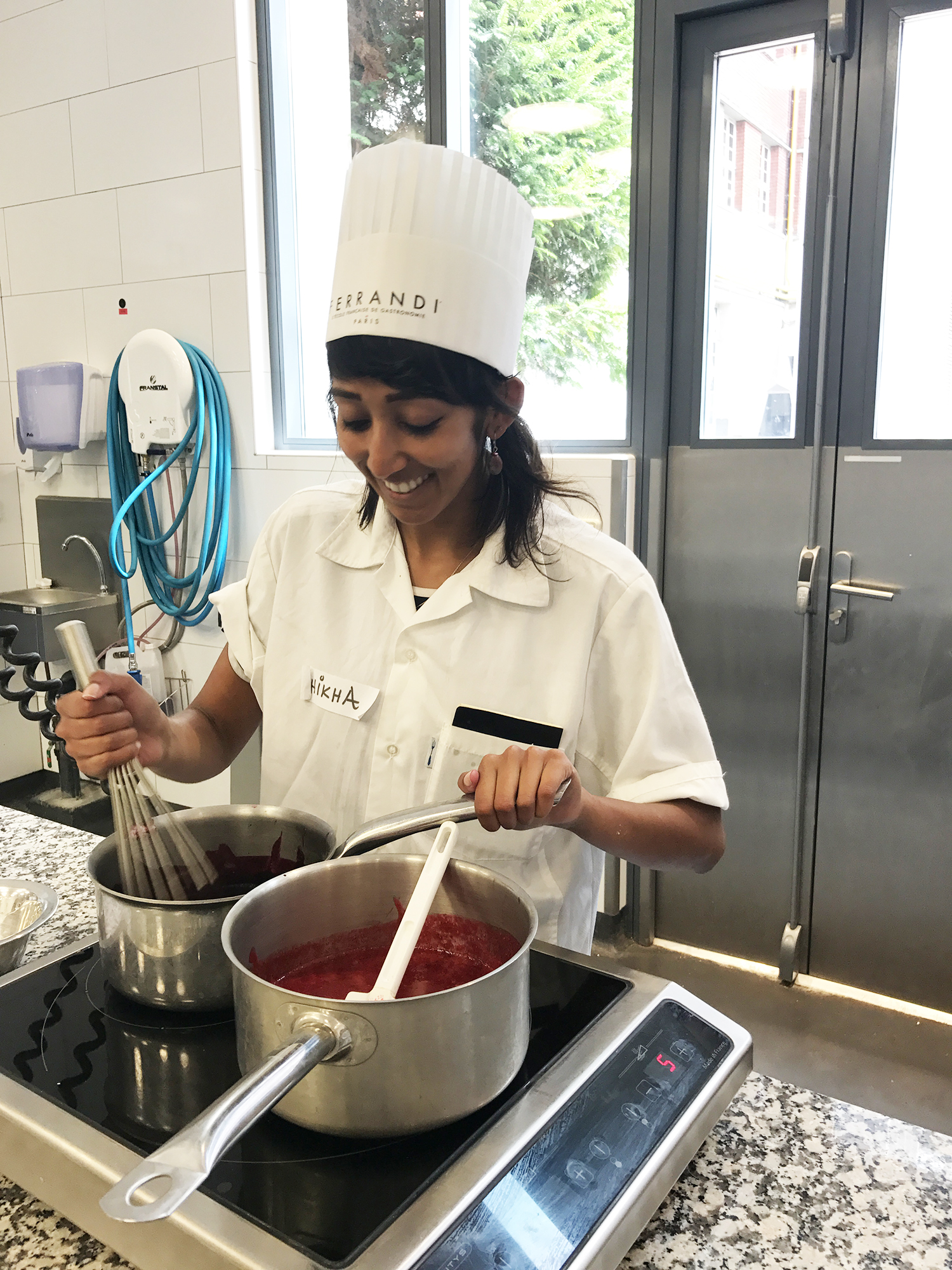 But there was no time to freak out because almost immediately, we’re put to work. Bastien (or Chef, as we have to call him) handed us folders full of everything we’re going to cook that week. The recipes were written half in French and half in English and amounted to 3 tarts and entremets per person, each with at least 6 layers of pastry. For perspective, one tart with a couple layers usually takes 2-3 days to make. We were about to make 3 tarts triple that size.

The next several days moved quickly. I spent my days working on things I didn’t even you could do in pastry. One day, Chef came in with a mini paint gun-looking thing and a funnel attached on top. He took one of our assembled entremets and slid it into a corner of the kitchen surrounded by plastic for protection. Then he took raspberry puree, poured it into the funnel of the gun, and turned it on. Out shoots raspberry spray paint that he began using to coat our cake with before telling us to finish the rest. Casual.

We did crazy shit like this until finally we had several, beautiful tarts and entremets to present to the other classes at Ferrandi in a showcase. It was one of the only times I saw Chef show emotion. As we explained our creations, Chef snapped selfies with us and sliced everything open for us to enjoy with a glass of champagne. For over an hour, all classes came to a halt as we ate and chatted about which pastry we liked best. This is exactly why I like the French so much—they enjoy dessert as much as I do. 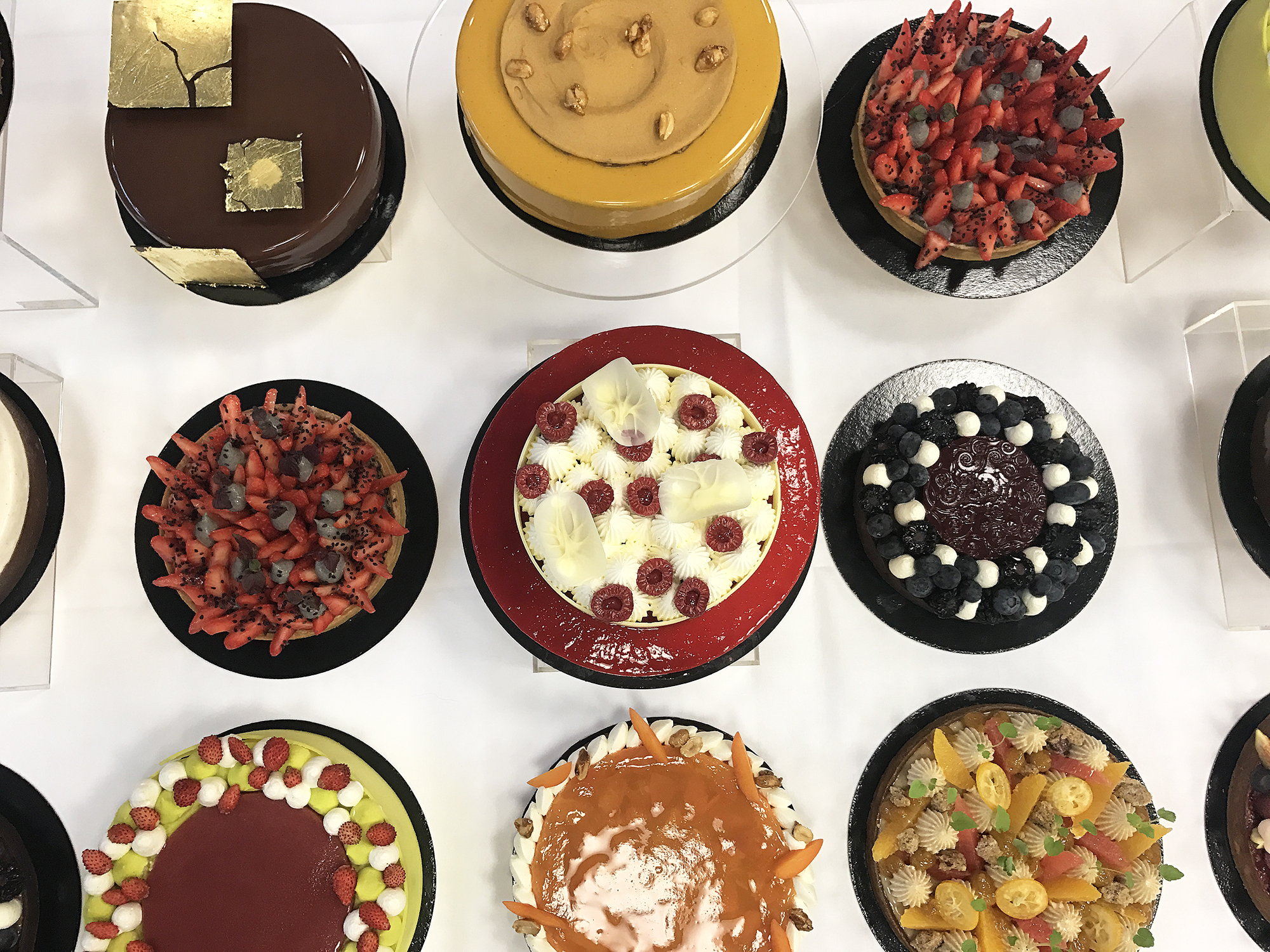 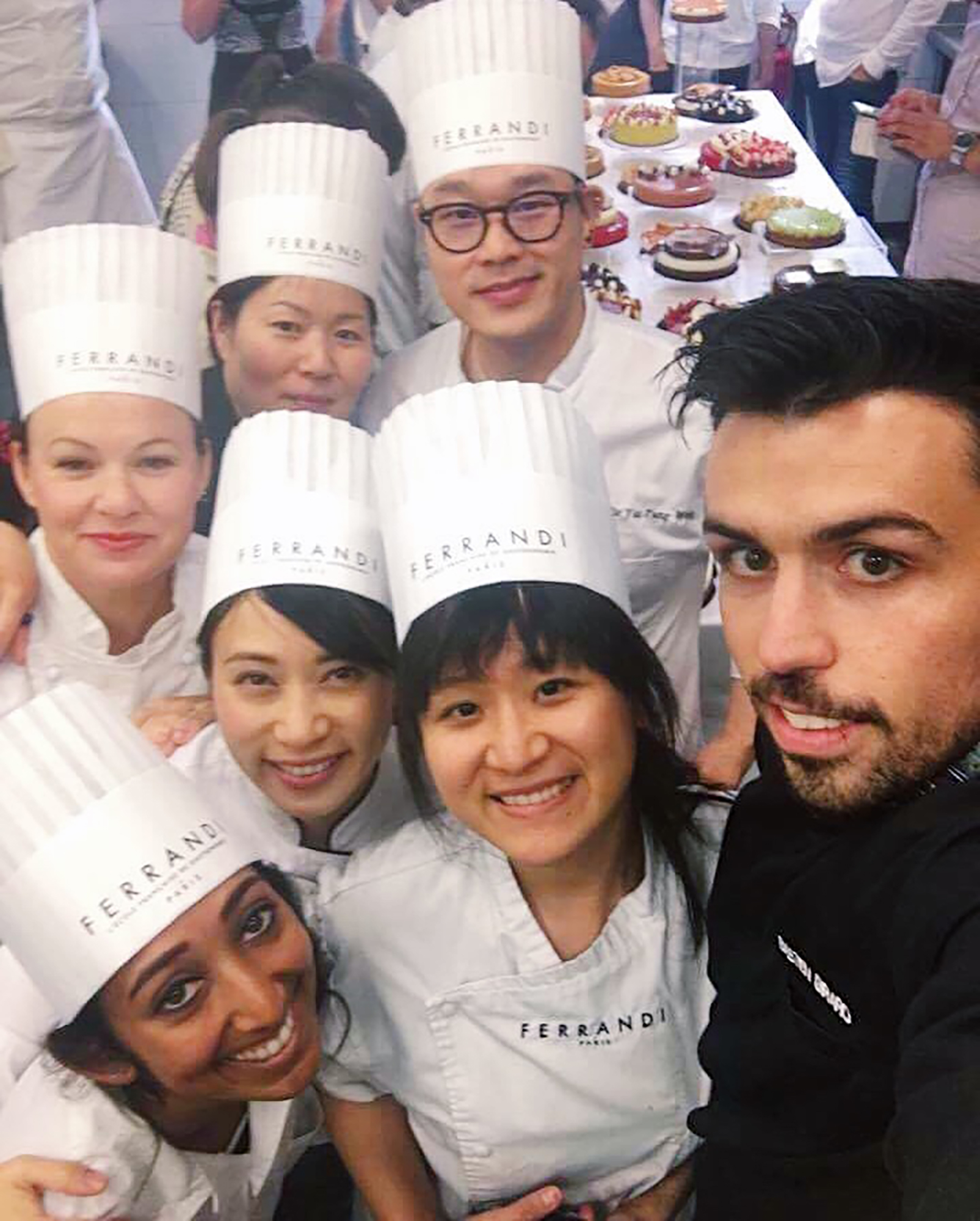 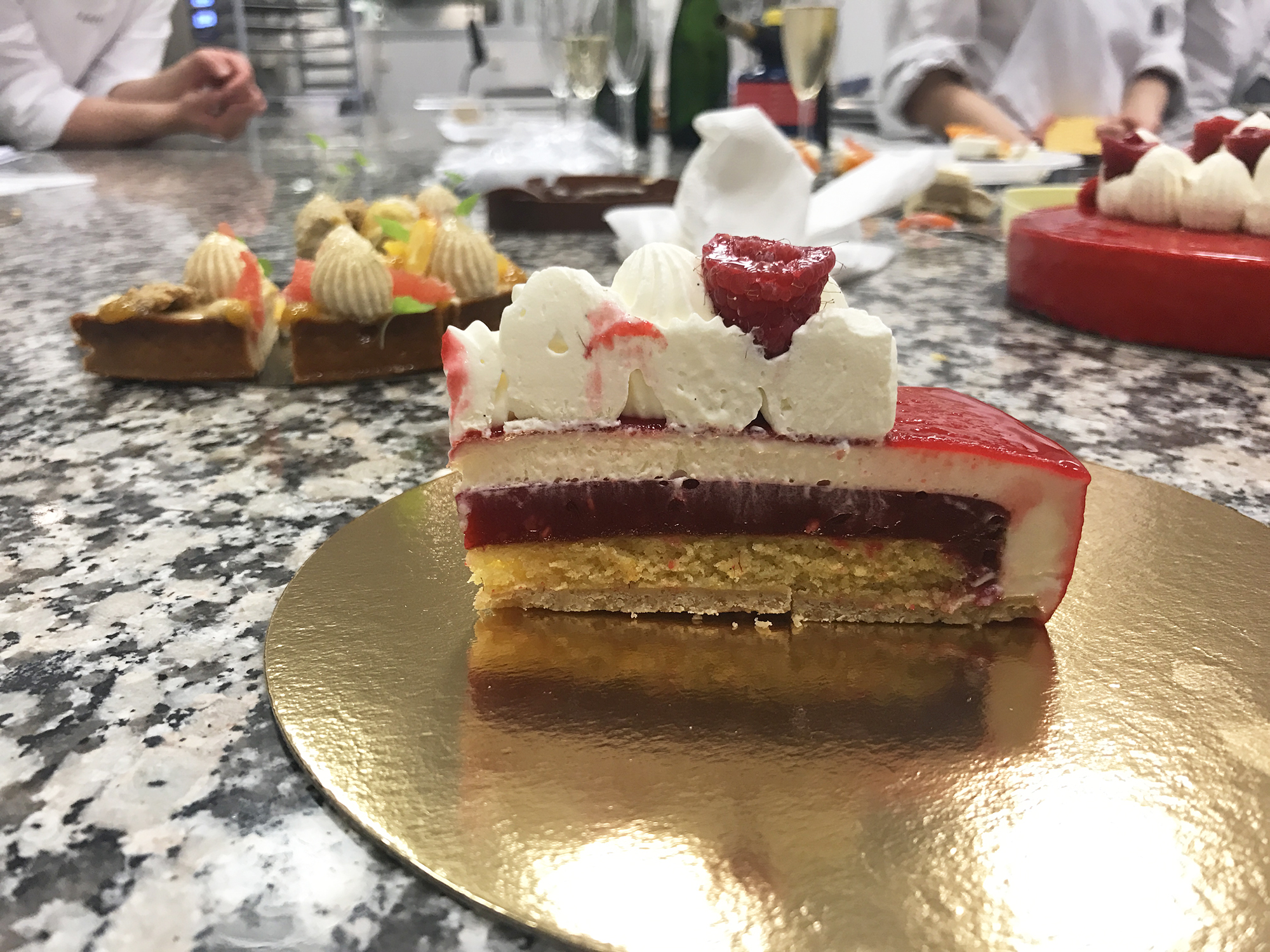 The following weeks were about chocolate and confiserie (confections). We had a new instructor who delighted in teaching us fun new ways to play with chocolate. One day, we used blow dryers to temper chocolate; another, we put melted chocolate in plastic wrap and massaged it with our fingers to get it to right temperature. We’d mix this chocolate with different flavors from jasmine to pistachio and make over a thousand truffles. Thank god we didn’t have to coat them ourselves; we did that with a giant chocolate machine that had a conveyer belt to push truffles under a cascade of perfectly tempered chocolate. This machine also costs 20,000 dollars, so definitely not something I’d ever use except in a professional kitchen. 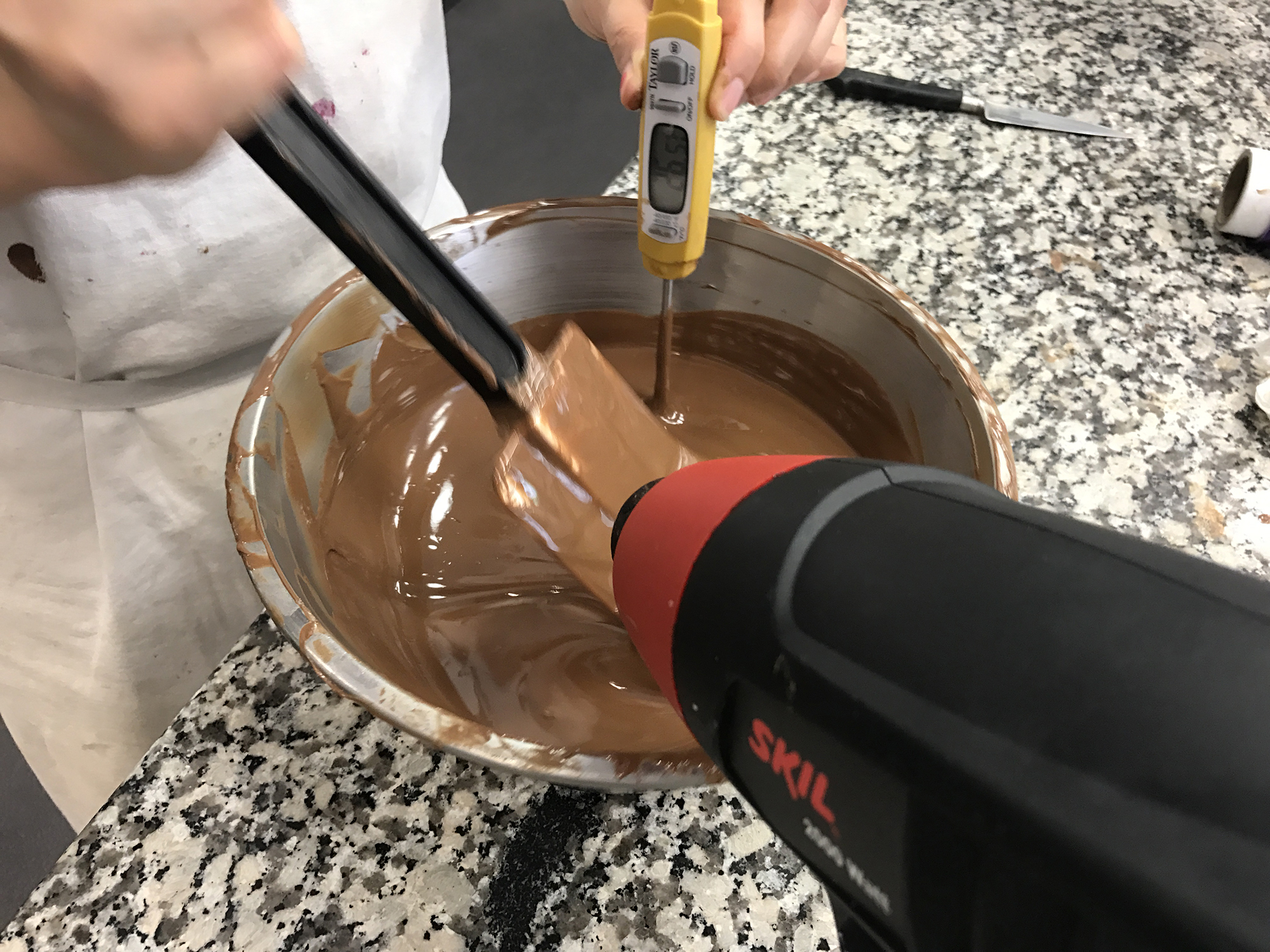 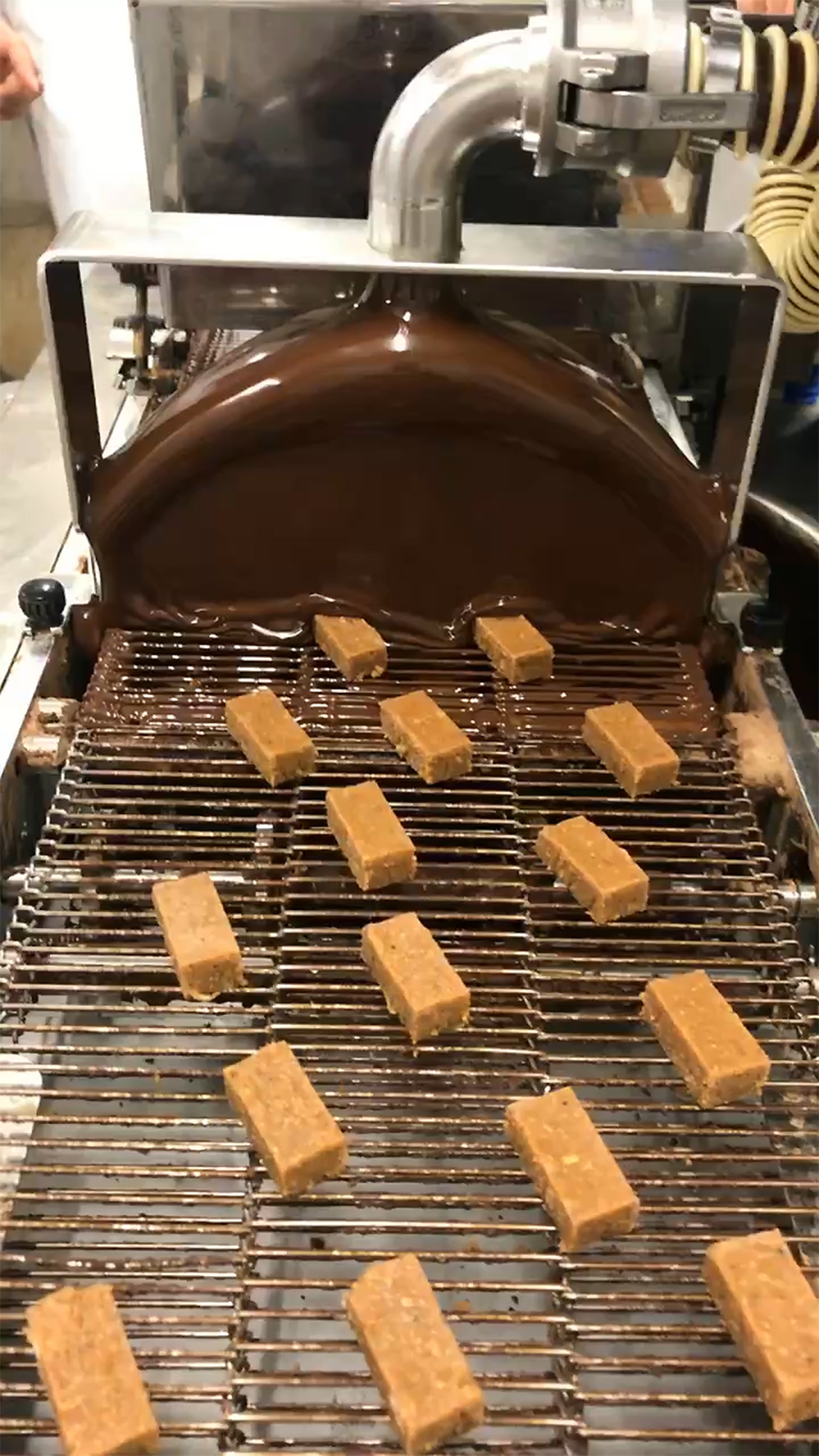 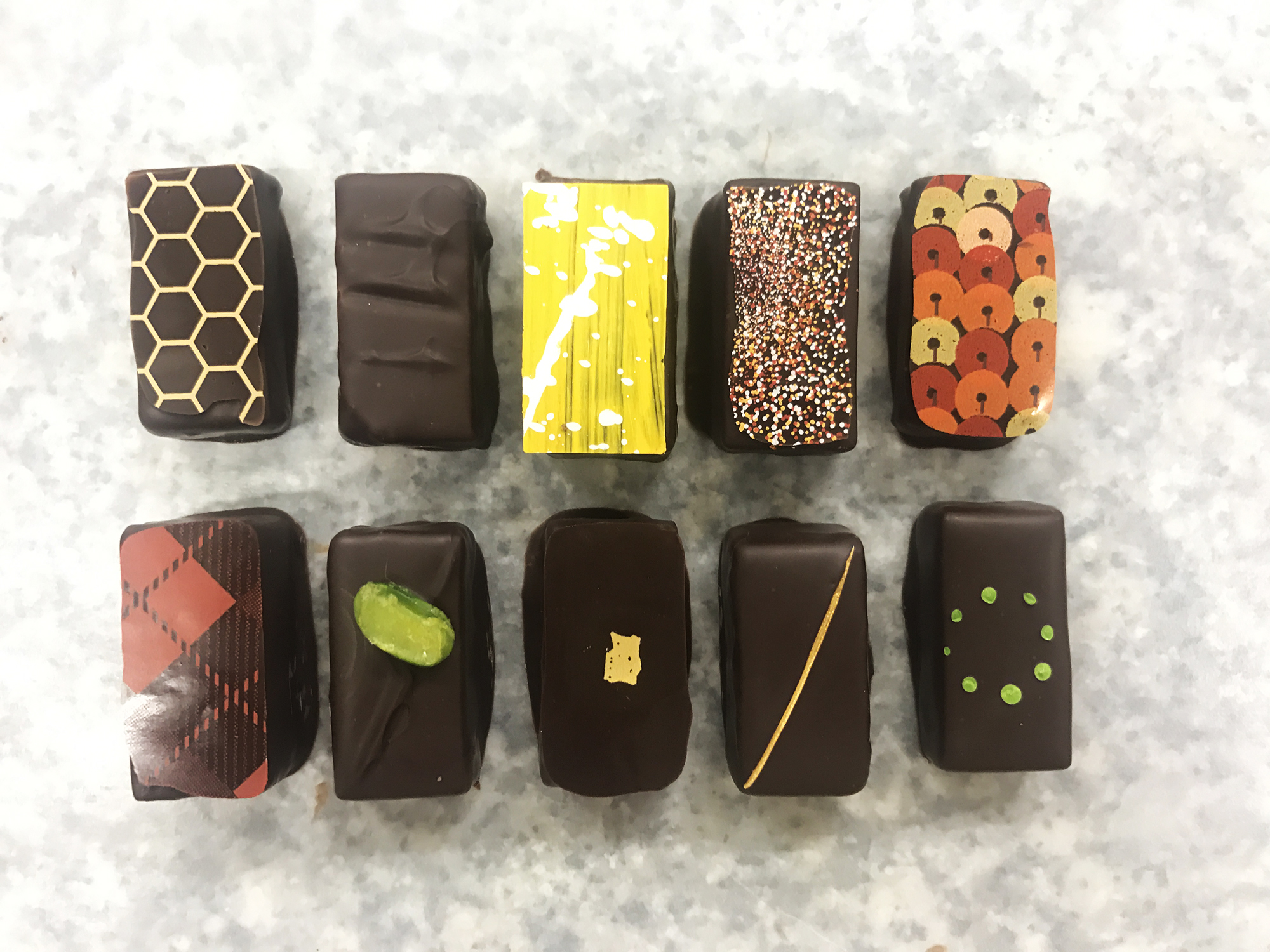 And then came sculptures. You know those crazy multi-tiered things you see in pastry competitions? Yeah, we made one of those! We needed a million different molds to make chocolate shapes, along with edible spray paint and a deft hand to craft chocolate roses with (this is a LOT harder than it looks, as proven when Chef looked at my mine and said, “You look like you’re doing an interpretation of a rose…”). Like last time, we presented these sculptures at the end of our session, along with truffles, guimauve (marshmallows), and caramels. 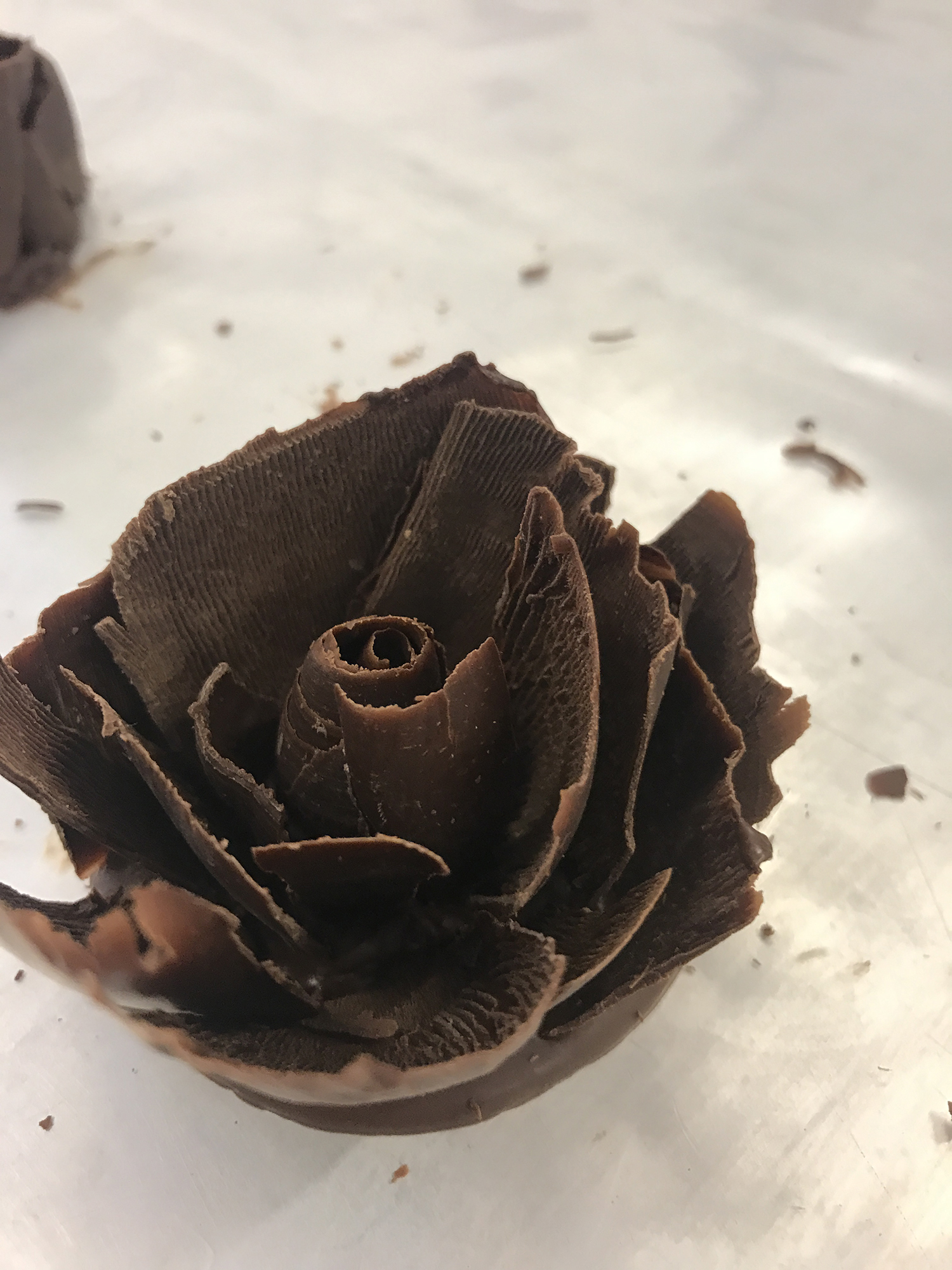 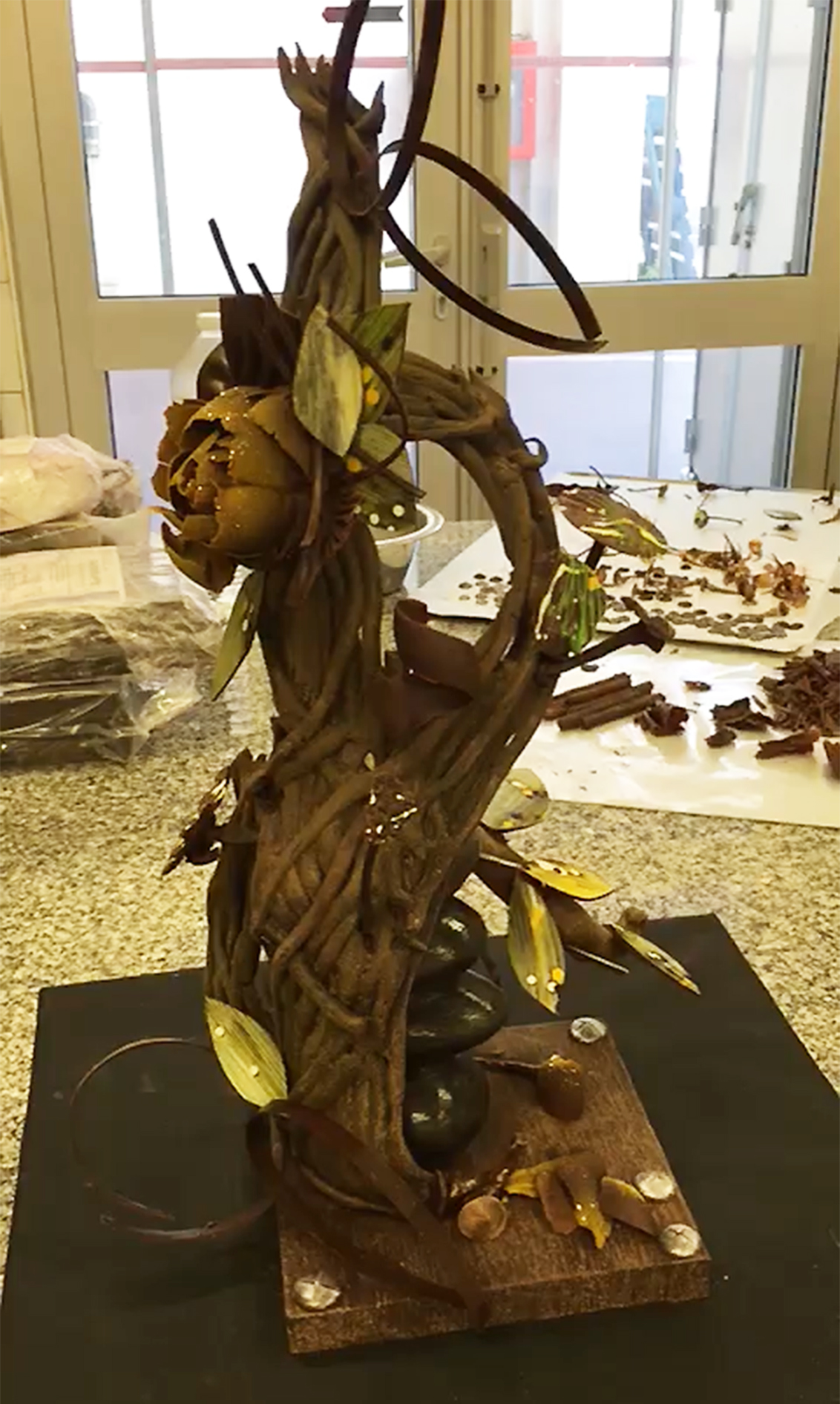 I felt all sorts of things during these days. The biggest feeling, and this is SO cheesy but sorry bout it, was that I felt simply alive. Nobody gets into cooking for the money, and I was no exception. But after being in tech, an industry that is fueled so much by money, I had forgotten what my core identity was and what actually ignited me. In Paris, I felt so fulfilled that I didn’t need anything or anyone else. In Paris, I was complete.

I also felt immense fear. Fear about coming back to the US to a life that was so subpar (at this point I didn’t have any job prospects, nor savings). Fear about staying in Paris (to run away? to try something new?). Fear about throwing away an opportunity to finally practice what I love again (some years before, I turned down a pastry job at the Fairmont Hotel which to this day is one of my biggest what-if life moments). Fear about not ever feeling as complete as I did then, ever again.

A year later, my mind often wanders to Paris— to Vélib bike rides to class; to ordering (and eating) 3 types of croissants for breakfast; to sunsets at Sacre Coeur. I often feel embarrassed. I rallied everyone up to get these advanced certifications and for what, to come back to America and work in tech? To sell out again?

But I also feel proud. I started cooking when I was thirteen and 15 years later, I’m still doing it. It’s not in a kitchen, but it’s in my life everyday. I cook for friends, family, and coworkers. I do pop-ups and cook for strangers. I take everything I’ve learned at Ferrandi and during my restaurant years and teach people around me how to love pastry the way I do. I teach people to slow down and enjoy their food, the way I did everyday in Paris, and the way I try to do now, even when America’s on-the-go culture gets in the way.

I’m probably not going to cook in a kitchen anytime soon. And I’m not sure when I’ll visit Paris again. I have these certifications, and just because I’m not doing exactly what I thought I’d be doing with them doesn’t mean they don’t have value—isn’t that like almost every college degree anyone has gotten? If we remain fixated on the piece of paper we acquire, we lose sight of what’s actually important that no degree can give you—dedication.

I thank you all for helping me get to this place. I’m nervous and excited to see where this food journey takes me. At least a year later, I can say this: a degree is a degree; passion is passion; and Paris is Paris. 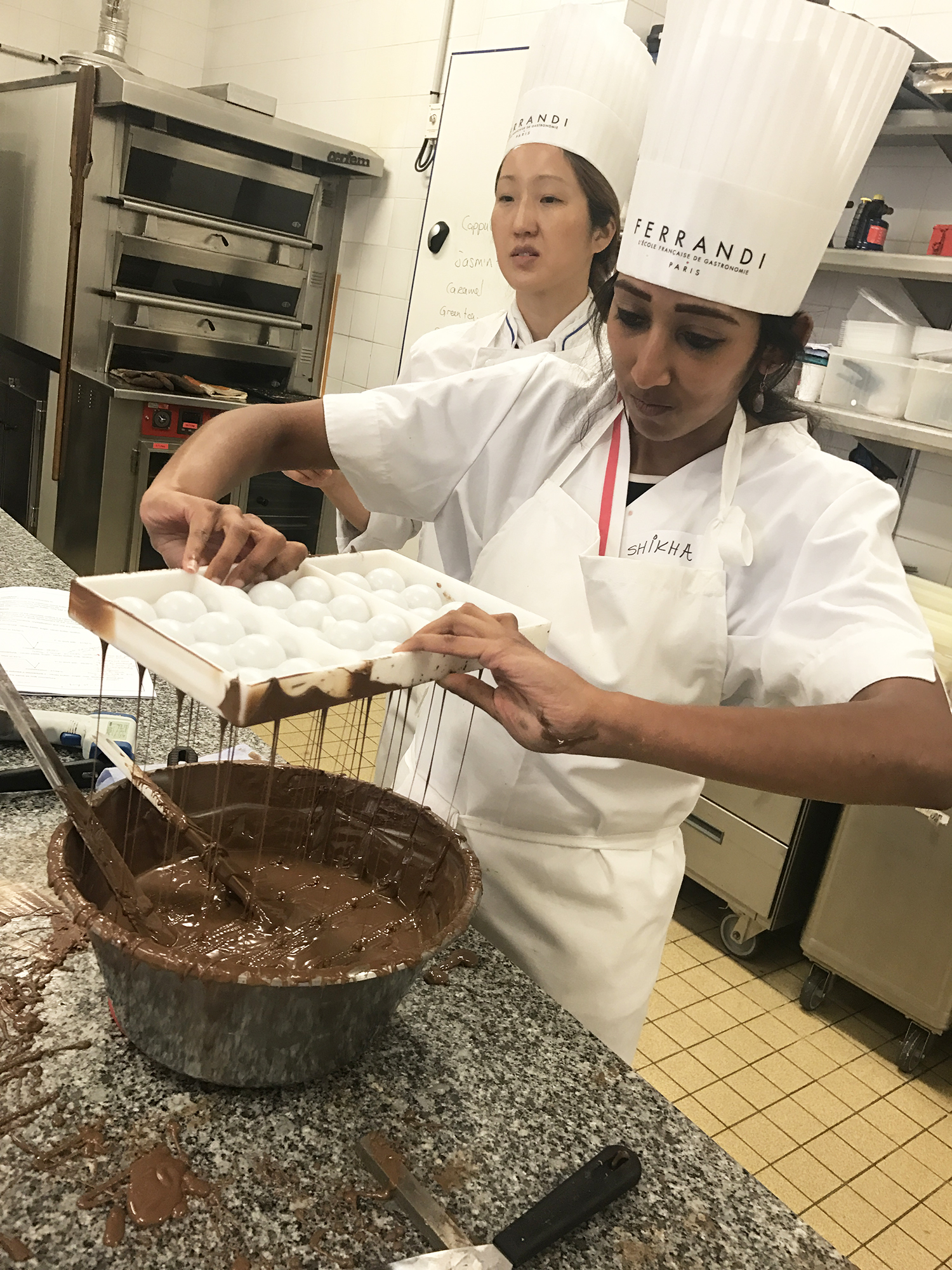 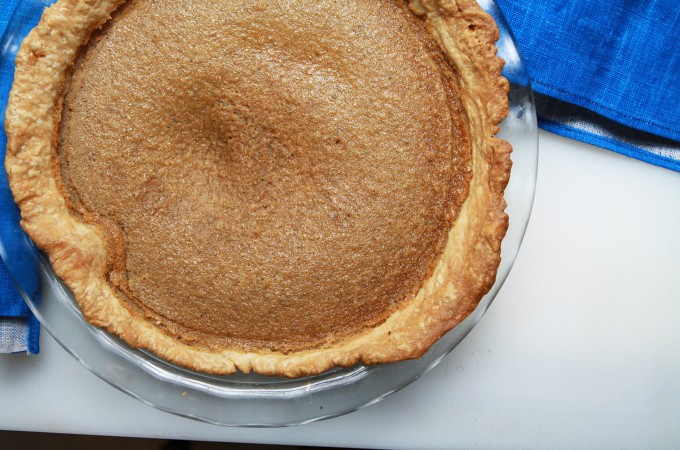 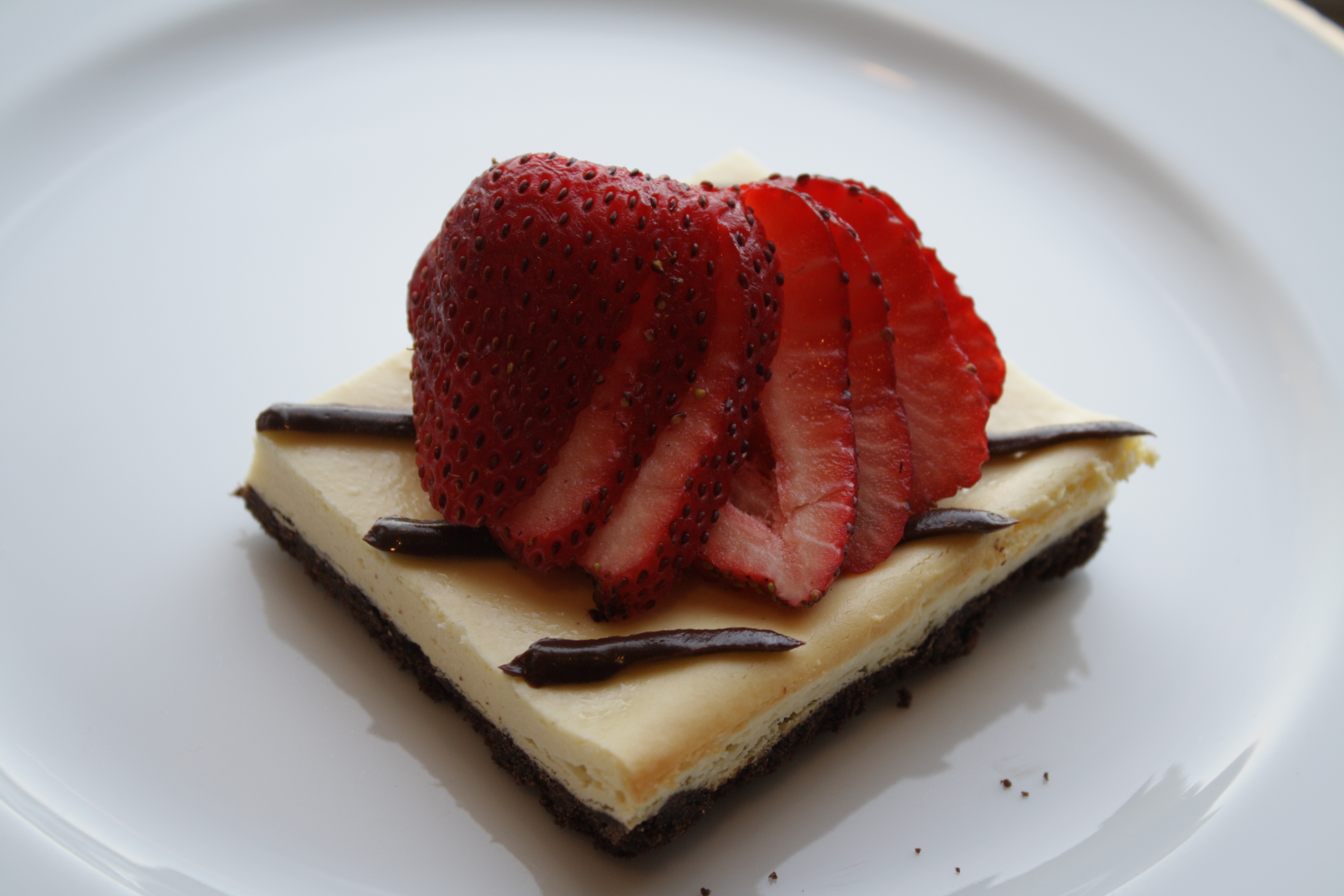 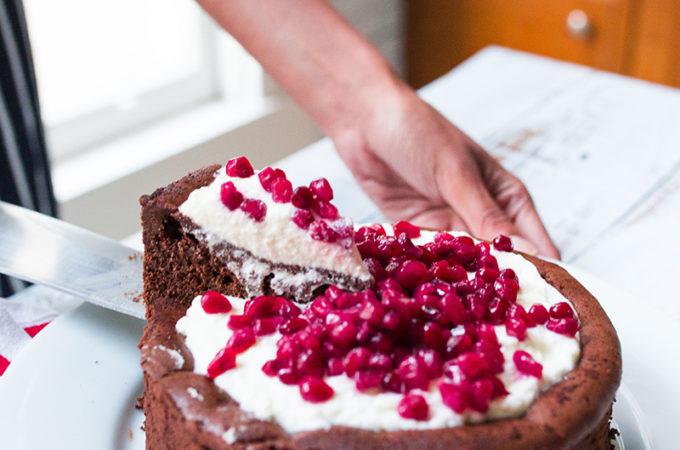